Skip to main content
The Federation responds to the Budget

The Creative Industries Federation welcomes commitments on innovation, tech, and digital infrastructure, but is deeply concerned about government’s failure to acknowledge the centrality of the creative industries to growing the country’s economy.

“Today’s Budget is disappointing. With the creative industries already contributing £87bn to the economy, the government has missed an important opportunity to invest in the UK’s fastest growing sector at a critical time for the country.

“Failure to back our world-leading creative enterprises and entrepreneurs will be to the detriment of a sector that creates jobs at four times the rate of the wider UK workforce. A lack of commitment to the creative industries will mean that this job creation in our towns and cities across the land will be damaged.

“All this comes at a time of lacklustre growth forecasts and the apportioning of a further £3bn to deal with faltering Brexit negotiations.

“As a highly innovative sector, working increasingly closely with tech, the creative industries welcome new funding for innovation and improved digital infrastructure. But the lack of ambition behind government’s commitments to the creative industries sector deal and the Cultural Development Fund risks undermining the growth and prosperity all are trying to achieve.”

In the run up to the Budget and ahead of the industrial strategy white paper, due to be published on Monday, the Creative Industries Federation called on government to address the severe skills shortages faced by the sector. Following on from the Federation’s letter in the Sunday Times, it is good to see that government has not proceeded with its threat to creative higher education funding. However, it is now vital that the upcoming white paper does not omit the importance of creative education - alongside and together with science, technology, engineering, and maths - to the prospects of our world-leading creative industries and wider UK economy.

Amongst the announcements in today’s Budget, it is encouraging to see that government has pledged part of its ‘industrial strategy challenge fund’ to innovation in the creative industries. An ‘audiences of the future’ project will help creative and tech industries to transform the way in which audiences engage with the UK’s world-class content through immersive technologies, such as virtual and augmented reality. The Federation and its members played a major part in securing this funding.

In addition, the Chancellor’s commitments include the following:

Growth: new money for Research and Development and digital infrastructure; maintaining the current VAT threshold for small businesses and freelancers; work on unlocking British Business Bank funding for IP-rich companies; investment in infrastructure and local growth, although only £2m has been committed to the new Cultural Development Fund - much less than expected; a further £1m to extend the UK Games Fund until 2020; reducing the burden of business rates to support businesses; doubling the annual allowance for people investing in knowledge-intensive companies through the Enterprise Investment Scheme (EIS).

Workforce: a review of the apprenticeship levy to ensure it works effectively and flexibly for industry; a consultation on extending the scope of tax relief currently available to the self-employed for self-funded work-related training costs.

Brexit: a commitment to set aside an additional £3bn to prepare for Brexit.

A detailed analysis of the full range of announcements in the Budget will be made available for members tomorrow.

On behalf of the sector, we will continue to push government on these points and more. To ensure that Britain is truly fit for the future, Brexit will remain a major focus of our work in the months to come. We will also take the lead on industry-led initiatives, such as our proposed Creative Careers Campaign and will be in touch with members soon to update on our planned activity.

Back proposals to solve the skills crisis or risk losing Britain's world-leading creative businesses
The PM’s vision to support industries of the future risks failure because of the growing skills gap faced by the UK's creative industries. The Budget and industrial strategy white paper will acknowledge that skills shortages need to be addressed. While there is a recognition of STEM (Science, Technology, Engineering, and Maths) industries and the need for training and education in maths and science, early indications suggest there is a vanishingly small amount of commitment and funding for the UK’s creative industries.
More
Industrial strategy

Industrial strategy - A blueprint for growth (Summary)
This document demonstrates the role the creative industries play in the modern economy and how a UK industrial strategy can use them to deliver growth to all sectors, nations and regions.
More
Download
Immigration 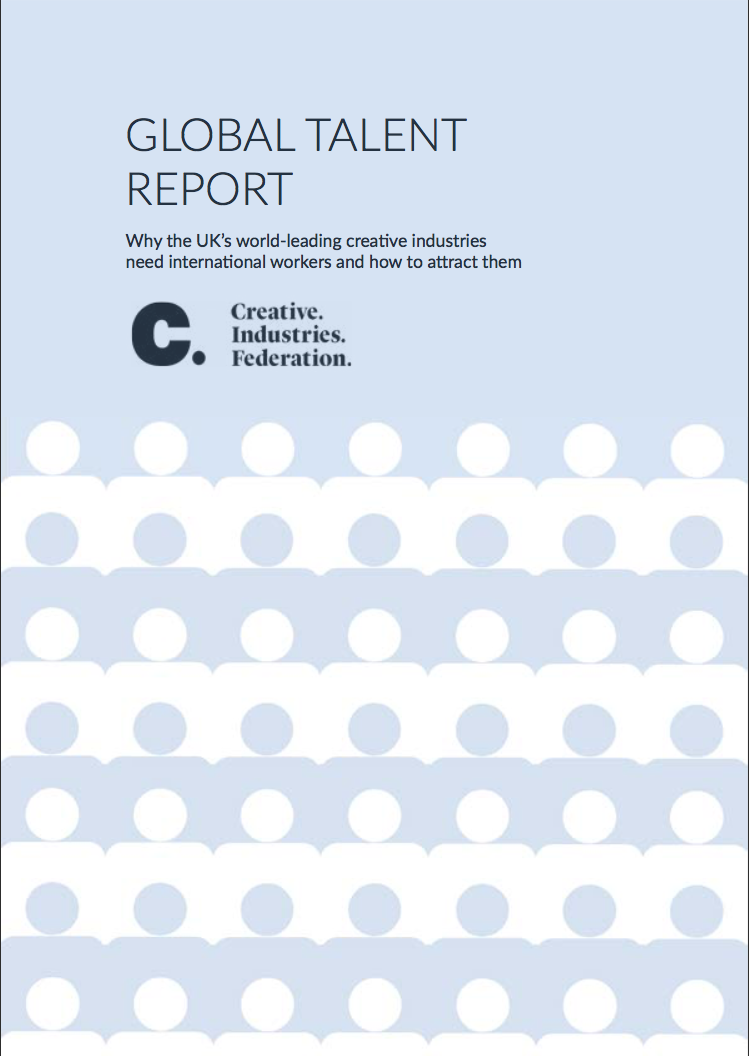 Global Talent Report
This report demonstrates the importance of international talent to the creative industries. It outlines how any new immigration system can best support the sector post-Brexit.
More
Download
Newsletter
For regular updates and other information please sign-up to receive our newsletter